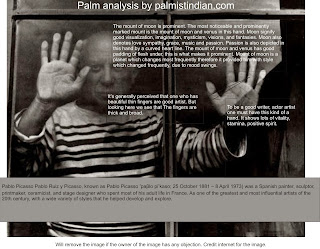 Pablo Picasso Pablo Ruiz y Picasso, known as Pablo Picasso ˈpaβlo piˈkaso; 25 October 1881 – 8 April 1973) was a Spanish painter, sculptor, printmaker, ceramicist, and stage designer who spent most of his adult life in France. As one of the greatest and most influential artists of the 20th century, with a wide variety of styles that he helped develop and explore.

It's generally perceived that one who has beautiful thin fingers are good artist. But looking here we see that The fingers are thick and broad.

To be a good writer, actor artist one must have this kind of a hand. It shows lots of vitality, stamina, positive spirit.

Luck plays a small role in one's success. There is more than that we can see on one's palm.

https://youtu.be/JHYlHakPk8M palmistry reading people want to know if they are going to be lucky or they will have huge amount of money ever...