Hand analysis of one of my clients indicating attachments and palpitation. Should avoid stress 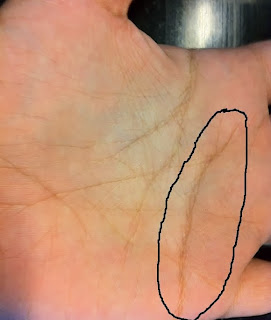 The heart line has branches and islands indicating attachments. It also shows lack of firmness in attachments. Like a bees which go from one flower to another. It can make a person flirt too often.

Meaning of detachment explained well in the article.

improve habits may limit the problem.

Email ThisBlogThis!Share to TwitterShare to FacebookShare to Pinterest
Labels: Hand analysis of one of my clients, hand reading with chained heart line 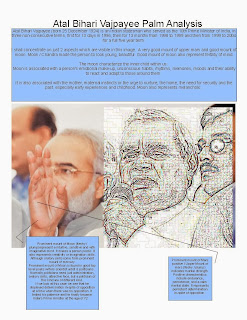 The moon characterize the inner child within us.
Moon is associated with a person's emotional make-up, unconscious habits, rhythms, memories, moods and their ability to react and adapt to those around them.

It is also associated with the mother, maternal instincts or the urge to nurture, the home, the need for security and the past, especially early experiences and childhood. Moon also represents melancholic.

Prominent mount of Moon (fleshy / plump / well-covered) represent a intuitive, sensitive and with imaginative mind. It makes a person poetic. It also represents creativity or imagination skills.
Although oratory skills come from prominent mount of mercury.
Prominent mount of Moon is found in good top level poets writers scientist artist & politicians.
Normally politicians need just administration, oratory skills, attractive face, but a politician of this kind are of different kind.
If we look at this case we see that he displayed determination in-spite of opposition at a time when there was no opposition. It tested his patience and he finally became India's Prime minister at the age of 72. 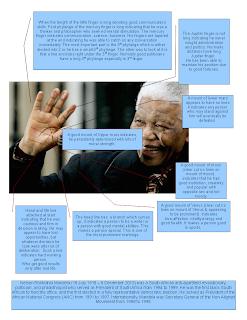 Nelson Rolihlahla Mandela (18 July 1918 – 5 December 2013) was a South African anti-apartheid revolutionary, politician, and philanthropist who served as President of South Africa from 1994 to 1999. He was the first black South African to hold the office, and the first elected in a fully representative democratic election. He served as President of the African National Congress (ANC) from 1991 to 1997. Internationally, Mandela was Secretary General of the Non-Aligned Movement from 1998 to 1999.

When the length of the little finger is long denoting good communication skills. First phylange of the mercury finger is long indicating that he was a thinker and philosopher who seek ed mental stimulation. The mercury finger indicates communication, science, business. His fingers are tapered at the end indicating he was able to catch on any conversation immediately. The most important part is the 3rd phylange which is either divided into 2 or he has a small 3rd phylange. The other way to look at it is that a line encircles right under the 3rd finger. Normally good politicians have a long 3rd phylange especially in 3rd finger.

The Jupiter finger is not long indicating he never sought administration and politics. Normally dictators have long Jupiter finger.


He has been able to maintain his position due to good fortunes.

A mount of lower Mars appears to have no lines it indicates any person who may stand against him will eventually be defeated.

A good mount of Upper Mars indicates, he persistently determined with lots of moral strength.

A good mount of moon (clear cut no lines on mount of moon)  indicates that he had good institution, creativity and popular with opposite sex and not moody.

A good mount of Venus (clear cut no lines on mount of Venus & appearing to be prominent)  indicates love,affection, vitality,energy and good health. It makes a person good in sports,

The head line has  a branch which curves up, it indicates a person to be a writer or a person with good mental abilities. This makes a person special. This is one of the most prominent markings.

Head and life line attached at start indicating that he was cautious and firm in decision making. He may appear to have lost opportunities, but whatever decision he took were after lot of deliberation.  Such a line indicates hard working person.
Who get good results only after mid life.

Luck plays a small role in one's success. There is more than that we can see on one's palm.

https://youtu.be/JHYlHakPk8M palmistry reading people want to know if they are going to be lucky or they will have huge amount of money ever...